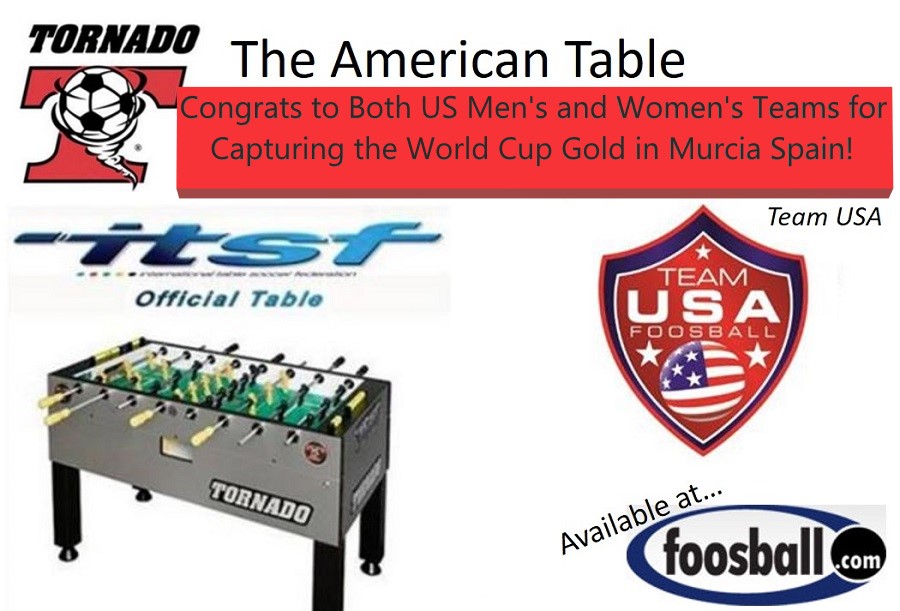 Foosball, aka Table Soccer, has never been more popular and more “broad” in terms of expanding scope of foosball as a Serious Sport, a Challenging Game, a Fun Toy and even an entertaining novelty (have you seen human foosball?).  So, your search/definition/category of foosball may steer you toward a few different answers to "what foos table is the best?".

If you've never seen a room full of 40 to 100+ foosball tables, with hundreds of players competing for multiple days in a major tournament.... You should check it sometime. If you are looking for the best foosball table in "this" sports equipment category. Look no further. Foosball.com’s main focus area is the sturdy/industrial quality cabinets with exacting playing characteristics that are in demand of the sport’s best stars.

The Tornado Tournament 3000 (T-3000) table is the best table in this category for American Style Playing characteristics. Building on it’s product and reputation since 1970’s, Tornado is "the standard" for competition foosball product in the US Market. It dominates the state and regional tournament calendar. On the international scene it is the official table of choice for reigning World Cup Champions – TeamUSA!   Follow "Read More" link below for a few photos from 2017 World Cup!

The United States Table Soccer Organization was formed in 2018 under the acronym USTSO. Their initial goal, to be the official federation for the United States (to the International Table Soccer Federation) is just tip of the iceberg so to speak.  This ISTF recognition, allows for US involvement in sanctioned international play to include the ITSF Table Soccer World Cup.  The USTSO is player-driven and focusing on needs of players at many levels both domestic and abroad.  They are staffing up quickly and asking what they can do to help YOU.  Get familiar with them at www.USAfoosball.com.  Follow them on social media and lend them your support where you are able!

What are the basics to play foosball?

Serve:  Place the ball in the center of the table between your middle two 5 bar men. Ask the opponent if they are “ready”. To put the ball into play, touch two men before advancing the ball.

Hitting the ball:  Strike the ball is with a flick or snap of the wrist and hand.

Passing and catching:  Be soft, absorb the impact of receiving the ball. Guide the ball and don’t overreact to receiving when advancing from one figure to the next.

Shooting:  Watch the defense to find an open hole to shoot the ball. Quickly snap or flick it into the goal. Don't do a big wind up before you hit the ball, a flick motion is better and more deceiving on where you are aiming.

Defense:  Think of all your figures as a team. They move together to make a larger wall of defenders. Try to stay or move in front of the ball as the opponent shoots.

Blocking slop:  When a loose ball on the table rolls into the goal unintentionally by the players, it is referred to as “slop”.  To block the slop in the corner of the goal, tip the goalie figure back enough for the ball to not go behind the figure.  Move smoothly in front of the goal to get loose slop balls in the middle of the goal.